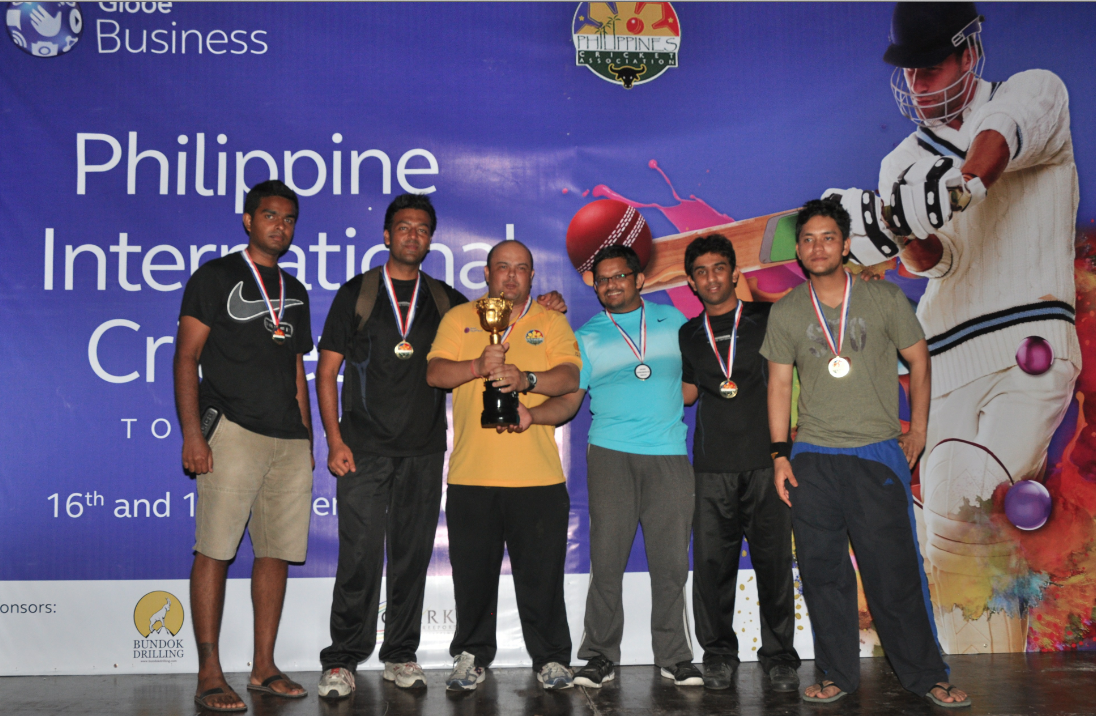 Team Caps & Tabs emerges on top in one of the plate-and-bowl matches of the Phil. International Cricket Sixes Tournament sponsored by Globe Business and the PCA

Local Filipino sports fans witnessed yet another high-powered cricket showdown as teams from all over the country and overseas gathered in Clarkfield, Pampanga for the 2013 Philippine International Cricket 6s Tournament.

Presented by the Philippine Cricket Association (PCA) and Globe Business, this years staging of the Cricket Sixes saw teams from Australia, India, Pakistan, England, New Zealand, Sri Lanka, Singapore and the Philippines slug it out for cricket supremacy in the region.

Batting for cricket domination
Twelve teams battled it out for two days, where the Manila-based Nomad Cricket Club beat challengers Jeckle All Stars with a brilliant performance in the finals. Heckle Cricket Club and Caps & Tabs on the other hand picked up honors as they competed against Globe-Cognizant and Baguio Cricket Club in a gripping plate-and-bowl match.

Waqas Mogul of Nomad Cricket Club was named “Bowler of the Tournament,” Jessa Singh of Angeles Cricket Club was adjudged with the “Batsman Award,” while Heckle Cricket Clubs Raju Singh bagged the tournaments “Best Catch Award.” Special recognitions were also given to players who have raised the level of play in the international scene during the fellowship night. Tariq Ali and Rajiv Kumar were awarded as “Best Bowler” and “Batsman” respectively for their individual performances in the Philippine Team Hong Kong tour.

An emotional tribute was also given to Faisal Khan, the first-ever team captain of the Philippine Team, as the PCA has announced his retirement and recognized his immense contribution in the advancement of the sport in the country. In his speech, Khan vowed to continue his efforts for Philippine Cricket outside the field and pledged to develop a full, indigenous Filipino Cricket team in coming years.

Bright future
The country is seen to have progressed in cricket more than its neighbors in the region and the PCA is enthusiastic that there will be more exposure for the national team and the sport. Fortunately, they have forged a strong partnership with Globe Business which shares the goal of bringing cricket into the collective sporting consciousness in the Philippines and making the international game a local staple. The brand is currently the lead sponsor of the Philippine National Cricket Team and the International Sixes Tournament. Globe Business was also the organizer of the first Enterprise Cricket Sixes Tournament, the first-of-its-kind corporate tournament of this sport in the country, held last year.

The collaboration aims to spur much interest in the sport, with more Filipinos getting to know what the game is all about. It will in turn encourage young local players to join the national team, according to PCA officials. Furthermore, the partnership provides an opportunity for foreign nationals working in the local BPO industry who are cricket aficionados to enjoy the game while here in the country. As PCA President Andrew Perrin stated, “Philippine Cricket cannot have a better name behind them other than Globe Business.”

“Cricket fans can expect an even more exciting competition in 2014. We will also ensure that working closely with the PCA, the sport will flourish in the country,” notes Globe Senior Vice President for Enterprise Group Nikko Acosta.

With Globe Business supporting the PCA, the sport of cricket is seen to thrive even better, engaging more Filipinos in the coming years.